Ousmane Dembele ‘wants to STAY at Barcelona and will lower his wage demands to secure a new deal… with Pierre-Emerick Aubameyang’s arrival being a key factor’ in convincing him his future is at the Nou Camp.

It was claimed earlier this year that Ousmane Dembele wanted a new contract worth £67million to stay with Barcelona.

Now, according to Spanish publication Sport, Dembele is not only prepared to slash his wage demands to stay at the Nou Camp, he is also prepared to accept less than what other clubs will offer him.

That doesn’t mean he’s guaranteed to stay – Barcelona are still working on a tight budget as they count the cost of the Covid-19 pandemic on their finances and have largely leant on free transfers to freshen up their squad in recent transfer windows.

It is claimed the club are looking at if they have enough money to return to Dembele with an offer he’d accept. He has previously been linked with moves to Chelsea and Paris Saint-Germain in the summer.

Sport also report that a key factor in Dembele wanting to stay a part of Xavi’s revolution is the January arrival of Pierre-Emerick Aubameyang from Arsenal.

Aubameyang has made an electrifying start in Barcelona colours, scoring 11 goals to date in Xavi’s resurgent side.

And in fairness to Dembele, the landscape at the Nou Camp has changed for the better since the start of the year, when he looked destined to leave.

Despite a recent wobble in form that saw Barcelona dumped out of the Europa League by Eintracht Frankfurt, Xavi’s men are second in LaLiga and well placed to qualify for next season’s Champions League. 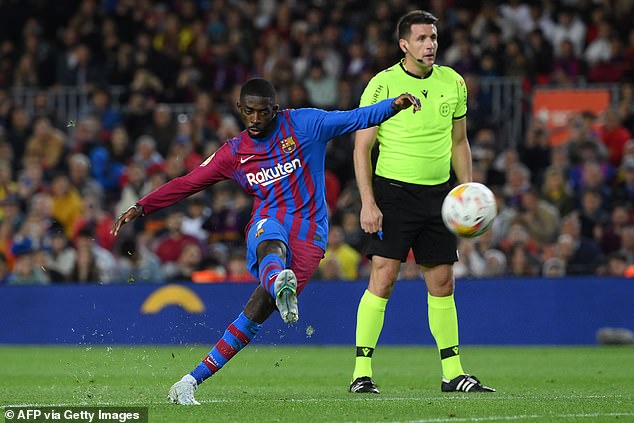 They are six points clear of fifth-place Real Betis – who lead the chasing pack trying to make the top four – but Xavi’s side are 15 points behind runaway leaders Real Madrid.

A title challenge will be on hold until next season, and it now seems Dembele could be a part of that.

The 24-year-old has played 28 times for Barcelona this season, scoring twice.

Why Barcelona could end up selling Aubameyang this summer – report

Album: Ali Gatie – WHO HURT YOU?

Album : Coheed and Cambria – Vaxis – Act II: A Window of the Waking Mind

The Game – DRILLMATIC – Heart vs. Mind Album Lyrics and Tracklist

Description:- The Game – DRILLMATIC – Heart vs. Mind Album Lyrics and Tracklist are Provided in this article. This...

Description:- Money Cash Clothes Lyrics The Game ft. A$AP Rocky are Provided in this article. This is a new...

Description:- Eazy Lyrics The Game & Kanye West are Provided in this article. This is a new song which...

Description:- Star Lyrics Megan Thee Stallion ft. Lucky Daye are Provided in this article. This is a new song...

Description:- Consistency Lyrics Megan Thee Stallion ft. Jhené Aiko are Provided in this article. This is a new song...